My blood is Titanic in soul and in spirit,
Rajah blood I inherit,
Which tumultuous will down through my arteries beat,
It is turbulence toned to hysterical war,
It is flame from the fumes of volcanoes astir,
Earth trembles anon with the tread of its feet.

Three colors weave flames for its sun and its stars,
Art’s cerulean, the red of belligerent Mars,
And the white of the lily by rivers afloat,
There are smiles when the colors above, death under,
My blood runs to its doom while the cannonades thunder,
Thus to die is the fate which in life it has sought.

It is frail as the cadence of pastoral verses,
Which the wind in low murmurs as often rehearses
By the tall river reeds when the afterglow fails,
It is savage as bulls from the tamaraw isle,
As ferocious and fierce as the dread crocodile,
It roars like our own immemorial Taals.

It conquers abysses, the summits it scales,
It never succumbs, it nevermore fails,
In its combat with might,
On it moves, singing hymns, to the enemy zone,
With its hope and its glory to summon it on,
The fatherland’s honor, the unredeemed right.

It is light as the naiad which heavenward flies,
As pure as its woodlands, and blue as its skies,
A tornado in war, and in peace <lays a sigh,
‘Tis a carol which often in thunder will blare,
A lamb which the anger of lions will dare,
A dove which the eagles of prey will defy.

A red alley of roses enchantment exhales,
The breeze from the mountains, the zephyr from dales
Of the slumbering wood,
Too, the rain that descends in drops crystalline-white,
The shades of the grottos, the gold of twilight,
And the powerful splurge of the risen sea-flood.

The soul of my race has its passing romances,
The woes of the spirit it often entrances
With the charm of the moonlight and moonlight’s refrain,
Through rents in the clouds see a crescent moon sailing,
0 ‘er the depths of a lake astir with its wailing,
It will smile as with joyance and silence its pain.

‘Tis a river awinding by palm and by pine,
Which will mirror within its confines crystalline,
Flames of heavenly plains,
But it, too, is a sea that the hills overtowers,
When let loose from the hold of its submarine bowers,
It whirls into chasms and bursts from its chains.

O brethren in spirit, our race is divine,
O eternal and sacred is the soul Philippine,
A hymn to its glory let all then enthrall,
While the clarion of fame roams the universe over,
To the ultimate lands where she wanders a rover,
Proclaiming the glory of the race of Rizal. 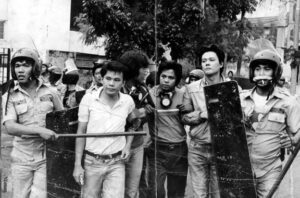